On a recent trip to Costa Rica, I visited Nicoya, one of the world’s most famous “hot spots of longevity,” commonly referred to as Blue Zones.

The first Blue Zone was described in a 2004 study in which researchers identified a distinct cluster of centenarians thriving in a mountainous region of Sardinia. Subsequently, Nicoya, as well as three other Blue Zones, have been recognized, including Japan’s Okinawa, Greece’s Ikaria and the Seventh-day Adventist community of Loma Linda, California. In 2008, Dan Buettner, a National Geographic journalist, published a best-seller in which he summarized lessons learned from these gold medal winners of longevity. Having read the book and studied prior interviews with the Nicoyans, I was eager to meet these extraordinary folks. So, I set out with my trusty Costa Rica expert and guide, Ron Carranza, to make the trek from the west coast inland to Nicoya.

Little did I know the stunning significance of the adventure that lay ahead.

Having reached Nicoya, we parked near the town square hoping to find a treasure trove of centenarians socializing under the canopied trees. They say that man makes plans … and God laughs. Well, He must have been having a field day, since we couldn’t locate any. Failing in our quest, we were advised to seek out Father Juan Carlos, the town priest who might direct us to the whereabouts of these elders. Since no one seemed to have addresses, we made lots of new friends knocking on doors trying to locate him. While doing so, we met a 94-year-old mother of 12 and a lovely 105-year-old as well. Both had a tight circle of family-based caregivers dutifully watching over their every need.

Eventually we located Father Carlos, who happily provided us with directions – “turn left at the cemetery, pass the tree grove, go over the bridge, watch out for horses” and so on – to the home of Maria Francisca Isolina Castillo Carrillo, or Panchita, now 109 years old. She was one of three Nicoyans interviewed by Buettner and a media favorite. Ironically, her rural region was called “Mansión,” which was quite antithetical to the small wood and metal abodes that dotted the hillsides.

Making our way to Panchita’s home, I could barely contain myself. In preparation for my trip to Nicoya, I’d reviewed Panchita’s many interviews, in which she never hesitated to speak her mind, effortlessly sharing her wit and wisdom. I envisioned sitting and absorbing wisdom from this vibrant centenarian.

Word to the wise: If you want to visit the great elders, you need a four-wheel drive. After a kidney-jolting ride up hilly dirt roads, Ron and I finally arrived. We were warmly greeted by Panchita’s 70-year-old granddaughter, Magdalena Mendoza, who was also her caregiver. Discovering I was a doctor, she suddenly became animated, and I listened intently as Ron translated her remarkable story.

Magdalena noted that during the year leading up to her 109th birthday, Panchita would repeatedly ask, “When is my birthday?” She’d never done that for any other birthday. Her over-the-top enthusiasm baffled the family, but Panchita was persistent with her ongoing excitement. Finally, her special day arrived, occurring one month prior to my visit. Seven jubilant generations converged to celebrate Panchita’s life and legacy. For hours they enjoyed home-cooked meals and treats, love, joy and countless stories. Once everyone had departed, Magdalena helped an exhausted but exhilarated Panchita to her bed.

The next morning, everything changed. Magdalena noticed that Panchita was completely different. Commencing the day after her birthday, Panchita began a rapid mental and physical decline. Already blind and mostly deaf, Panchita now seemed profoundly confused. Eating and sleeping became erratic. Deeply worried and perplexed, Magdalena asked me for help, which I was honored to provide. Apparently, no medical provider had seen Panchita in a long while. As Magdalena ushered me into Panchita’s small bedroom, I had an overwhelming sense that this was all meant to be.

Entering the room, Panchita lay on her back, flailing her arms, crying and calling out to Magdalena. Tiny and frail, she seemed frightened and frustrated by her difficulty with speech and apparent lack of strength. Gently, I performed a cursory examination and determined she’d most likely experienced a stroke. As I tried to soothe her angst by softly rubbing her bony limbs, I felt deep compassion for this woman who, after 109 years of feeling in control of her own life, was now terrified, not knowing what had happened to her and unable to express her feelings coherently. I sat with her, stroking her arms. Eventually she calmed down, and at one point, turned toward me, grasped my hand and smiled. She couldn’t see or hear me, but in that moment, I felt an unforgettable, deep, primal connection. 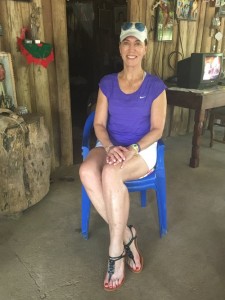 The author sits in Panchita’s favorite plastic blue chair on the insistence of Panchita’s granddaughter, Magdalena, that it might provide good luck with the author’s own longevity.

I then counseled Magdalena about how to care for Panchita, and to mentally prepare for her eventual passing. She seemed relieved and was accepting of “nature’s way.” I signed Magdelana’s guest book, noting the signatures of numerous journalists from around the world who’d enjoyed meeting and talking with her over the years. Then Magdelana directed me to the patio, and insisted that I sit in Panchita’s favorite plastic blue chair, the same one in which she’d been frequently photographed by international media. I asked why and she winked and laughed, saying perhaps it might endow me with good luck for my own longevity. “Hey, I’m good with that!” I declared, chuckling, and plunked down, hoping by doing so I’d racked up a few years of vitality.

There were hugs aplenty as we left that day, and lots to contemplate.

On the drive back, Ron and I felt transformed. We realized that we’d participated in something very special and sacred. We were witness to the transition of this remarkable centenarian into the final phase of her life. I felt grateful for the opportunity to help Magdalena, and to meet Panchita in a way I had never expected.

Throughout my entire Nicoyan journey, I was constantly reminded of and humbled by the power, magnificence and rhythms of nature. Despite abject poverty, Panchita was rich. Getting up at dawn to begin her tasks, cooking whole foods grown on her property, picking fruits from her trees, busily trekking from task to task, enjoying networks of family and friends, caring for her animals, eating in concert with her natural circadian rhythm, practicing her faith and sleeping peacefully after a day’s work – natural living from dawn to dusk.

Panchita lived and will pass by nature’s rules.

To Live Long and Well, Live in Congruence With Nature

Transfixed by our 21st century, 24/7, grab-and-go, stressed-out, sleep-deprived, high-tech lives, most people are miles from any congruence with nature and its natural rhythms. But to achieve optimal longevity and lifelong vitality, we mustget back in sync with nature. No pills, potions, killer gym class or gluten-less food product will ever achieve what living a holistic natural existence can produce.

To get you started, here are a few rules of the road as you begin to integrate Mother Nature’s master plan for longevity:

Now, as I go through the day, I have Nicoya moments. Walking my beloved German Shepherd in the park often conjures the fragrant scents from the lush forest surrounding Panchita’s modest dwelling. And, I’ll always cherish the memories of that day by her bedside, as we smiled together, mutually comforted by a sacred, natural bond.